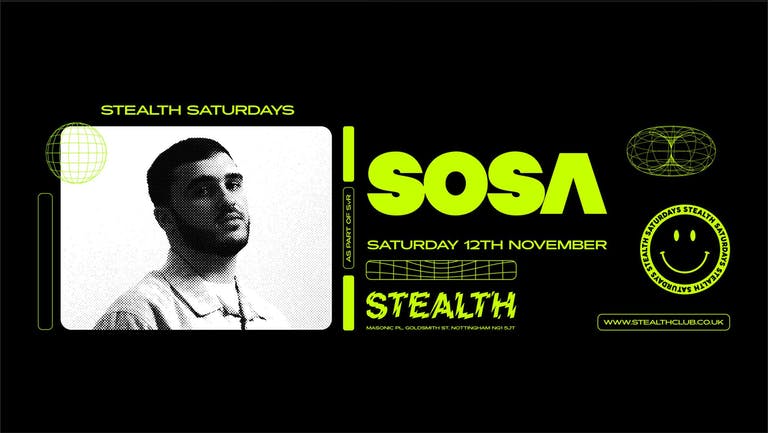 SOSA at STEALTH (Stealth Saturdays as part of SvR)

SOSA at STEALTH (Stealth Saturdays as part of SvR)

Bringing you the best in Electronic, Rap & Hip-Hop Music every Saturdays to give you 7 hours of partying!

Liverpool has always been known for its rich musical heritage but in recent years it’s house music that’s been ringing through the streets of this northern city. With house music royalty such as Camelphat & Yousef flying the flag for so long, all eyes now fall on SOSA as Liverpool’s new rising star.

Recognised for his hypnotic grooves, SOSA has been busy honing his skills in the studio, perfecting his signature minimal-tech productions. His tracks have picked up support from key tastemakers such as The Martinez Brothers, Michael Bibi, PAWSA and Jamie Jones, with releases on Cuttin Headz, Hottrax, Solid Grooves RAW, Moxy Music, Repopulate Mars, Ultra & Ministry of Sound to name a few.

In 2019 SOSA unleashed ‘DFCW’, his huge debut record on Solardo’s Sola label, which gained the support of leading names such as Camelphat, Skream, Eli Brown, Alan Fitzpatrick, Eats Everything, Green Velvet and more. SOSA then went on to remix Solardo & Eli Brown’s hit record ‘XTC’ with high praise coming from Radio 1’s Danny Howard. The Liverpudlian went on to earn further support from Radio 1, this time from Pete Tong who invited SOSA to undertake the first Future Stars Mix of 2020.

Showing no signs of slowing down SOSA launched his own imprint COCO in an effort to spearhead the minimal-tech scene, kicking things off with his highly anticipated release ‘The Sax’. SOSA capped off a successful 2020 with ‘Your Love’, his follow up release on Ministry of Sound which topped the Beatport Garage chart after a mere 24hrs, also earning the support from Annie Mac, Pete Tong & Danny Howard at Radio 1.

But in 2021 SOSA started the year achieving his dream with a release for The Martinez Brother’s imprint Cuttin Headz with his ‘Classy EP’. To this day, SOSA’s release remains one of the best selling EP’s on the label. Following this, another career milestone was achieved as SOSA signed to Jamie Jones’ legendary Hottrax label with ‘The Wave’. But the standout release of the year came on SOSA’s COCO label in the form of ‘It’s Time To Move’ which took the world by storm, gaining support from Michael BIBI, Richy Ahmed & Solardo to name a few.

But one of SOSA’s most defining achievements has been the creation of COCO’s live event series. The first COCO show was held in SOSA’s hometown Liverpool and sold out in a staggering 45 minutes.

Plus 3 more rooms of music as part of SvR!